Diamond - The birthstone of April 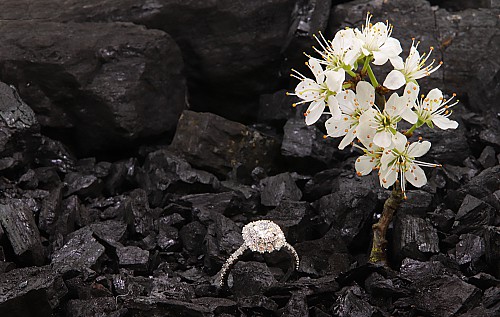 Diamond is the birthstone for the month of April, and also the stone that marks the 60th anniversary of marriage. Its name is derived from the ancient Greek (adámas), which means invincible or unconquerable.

Most natural diamonds were formed over 1 billion years ago at depths over 150 kilometres under high pressure and temperature in the Earth's mantle. They are carried to the surface in volcanic eruptions and deposited in igneous rocks known as kimberlites and lamproites.

Diamond is a solid form of carbon. The carbon atoms bond in a unique way that results in a diamonds’ beautiful and rare crystalline structure, which has the highest hardness and thermal conductivity of any natural material known. The only thing that can scratch a diamond is another diamond.

Ancient Greeks thought that diamonds represented the tears of weeping gods, and Ancient Romans thought they were considered to be parts of the outer rings of stars, which had fallen to the earth. Many ancient cultures believed that diamonds gave the wearer strength and courage. During battle, and some kings wore diamonds on their armour.

It is believed that the first diamonds were discovered in India, at least 3000 years ago, but more likely as long as 6000 years ago. Diamonds have been treasured as gemstones since their use as religious icons in ancient India.

Gemologists rate diamonds based upon what is called “the 4 C’s,” referring to carat, cut, colour, and clarity. Carat refers to the weight of the diamond. Cut refers to how perfectly symmetrical and aligned the facets are maximising light and increase a diamond’s signature sparkle. ‘Clarity’ refers to the natural blemishes found inside diamonds and ‘Colour’, referring to its shade, ranging from brilliant white to pale yellow. These subtle differences are graded on a colour scale from D (colourless) to Z (light yellow). Impurities such as nitrogen in the formation of diamonds can lead to colours such as orange, green, blue, pink, black, yellow, orange, green, red, and brown.