Opal, the birthstone of October 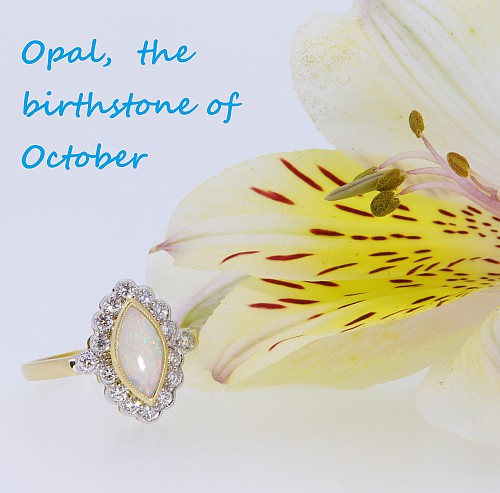 Opal is formed by rain that soaked deep into underground rock, carrying dissolved silica. During dry periods, much of the water evaporates, leaving solid deposits in the cracks forming opal.

Opal is the birthstone of October, along with pink tourmaline. The name opal is thought to be derived from the Sanskrit upala, meaning “precious stone,” and later the Greek derivative “Opallios,” meaning “to see a change of colour.”

Historically, opal has been regarded as the luckiest and most magical of all gems because it was believed to possess all the virtues of each gemstone. The multitude of colours in an opal are created by sub-microscopic spheres that diffract and bend light waves into a rainbow of colours.

Opal is sometimes said to bring bad luck, because in the early days jewellers did not understand how to handle and work opals properly often causing them to break. Sir Walter Scott’s bestselling novel written in 1829, Anne of Geuerstein, tells about a lady who dies shortly after a drop of holy water accidentally fell on her opal. This was taken as a warning of the bad luck an opal can bring. The opal market crashed 50% within months. Opals are highly prized today, since the discovery of vast deposits of beautiful opals in Australia, and the fact that Queen Victoria gave opals to her daughters for wedding gifts.

In folklore it was said ‘to wear opals would prevent blonde hair from fading and darkening’, or even grant invisibility if wrapped in a fresh bay leaf and held in the hand!